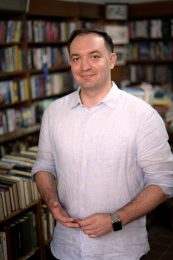 A senior researcher of the world political development issues department of the Kuras Institute of Political and Ethnic Studies of the National Academy of Sciences of Ukraine. Doctor of Philosophy, MA in Public Policy and Administration.

Has graduated from the Taras Shevchenko Kyiv National University (“Philosophy and Religious Studies”). Got a qualification “philosophical disciplines lecturer”. In 2008 has defended his PhD thesis “Comparative analysis of social doctrines of Islam and Roman Catholic church”.  In 2012 has graduated from the National Academy for Public Administration (“Public Policy and Administration”). Also studied at the Ludwigs-Maximilian University (Munich, Germany) and at the Malmo University (Sweden). In 2018 participated in the LADU (“Role of public policy in the public a sector development”), a joint program of the Stanford university and the Ukrainian Catholic university. Is currently working on his post-doctoral thesis.

From 2007 till 2014 has been working at the National Institute for Strategic Studies. Is an associated expert of the Foreign Policy Council “Ukrainian Prism” and a co-founder of the public diplomats network “Global Ukrainians”. Is being frequently published by Ukrainian and foreign media.

As a national expert has represented Ukraine at the CAHROM Committee (2015). In 2017 was a co-author of the NATO Centre of Excellence (Riga, Latvia) research “StratCom Laughs: In Search of an Analytical Framework”. Is a participant of the Digital Community Network (Washington, USA), a global network that unites specialists in digitalization issues from NGO`s, business and politics.

Coordinator of the international advocacy campaign “Protect Dniester river”. Is often invited as a guest lecturer by national and foreign universities. Had a fellowship in the Pennsylvania state government (USA) in 2011 and is a participant of the US government programs for the global leaders LFP (2011) and IVLP (in 2019). Co-organizer of the annual Polish-German-Ukrainian Bohdan Osadchuk winter school (Poland). Speaks English and German. Arabic, Estonian – basic level.