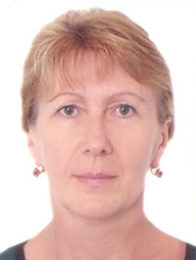 Junior Research Scientist at the Department of Theory and History of Political Science.

In 1993, she graduated from O. Korniychuk Kyiv State Institute of Culture on the specialty “Library Science and Bibliography”, specializing in Social and Political Literature. She received the qualification – “Librarian-bibliographer”.

She worked as a leading historian since January 2008, and has been working as a Junior Research Scientist since April 2016 at Kuras Institute of Political and Ethnic Studies of the National Academy of Sciences of Ukraine.