On the 5th of December, a new book on the postcommunist transformations in Eastern Europe since 1989 was launched online during the international conference “90 years of Polish Eastern Studies” at the University of Warsaw. The Senior Research Fellow of the Ethnopolitics department Mykola Riabchuk presented the book “Eastern Europe since 1989” that summarized the cycle of his guest lectures delivered at the UW in the past decade. The book examines political processes in Eastern Europe after the fall of the communist system and collapse of the Soviet empire in 1989-1991. Its primary goal, according to the author, was to explore the structural factors that determined their different development as well as the role of domestic and international actors that influenced the direction and speed and scope of postcommunit transformations. While the author keeps all the East Europe in mind, the main focus is on the post-Soviet part of the Eastern Europe, specifically on Ukraine as the most complicated, ambivalent, and graphical case of both the decommunization and decolonization processes. The process tracing is combined in the study with political analysis of historical developments in the postcommunist Eastern Europe drawn primarily on the theories of hybrid regimes, illiberal democracies, path-dependence and revolutionary breakthroughs. The UW professor Dr. Aleksandra Hnatiuk moderated the Q & A session with the author during the book launch. The video-record of the presentation can be accessed (in Polish, between 1:18 – 1:57) at https://www.youtube.com/watch?v=YThRboAbjZc. 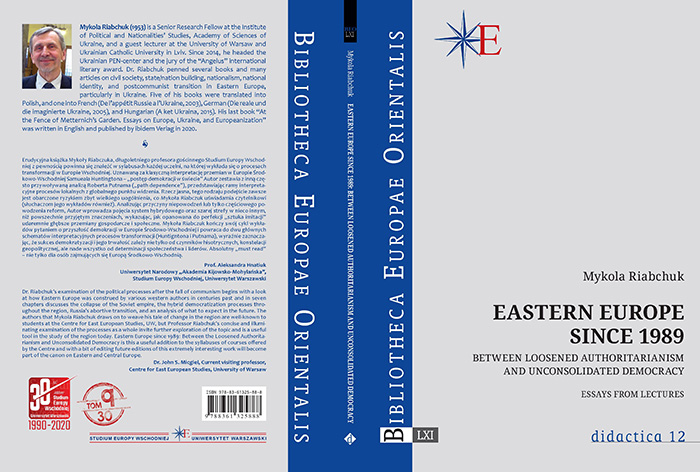