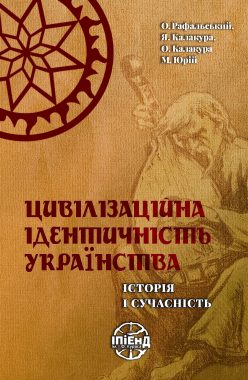 The text of the monograph “Civilizational Identity of Ukraine: History and Modernity” is posted on the Institute’s website in the “Our Publications” section.

The monograph was prepared by a team of scientists consisting of: O. Rafalskiy (head of the team of authors), O. Kalakura (scientific editor), M. Yurii.

The monograph examines the phenomenon of Ukrainian civilizational identity, its origins, becoming and current condition in the context of humanitarian interdisciplinarity, combination of historical, philosophical, politological, sociological and cultural methods of cognition, from the standpoint of civilizational, anthropological and sociocultural approaches.

Theoretical and methodological principles of the essence of civilizational identity, its structure: ethnic, national, cultural, religious, political, civic, european and other components, the relationship of civilizational identity with mentality and globality in the dynamics of historical progress and transformations since the era of Middle Ages, Kyivan Rus state, Renaissance, modern and ending with postmodern are being clarified. The historical mission of the Ukrainian Cossacks as the bearer of new features of national identity is shown, the civilizational self-determination of Ukrainian identity at the turn of the XIX-XX centuries, the role of conscious, social psychology and national idea in the transformation of identity are being tracked, the causes of the crisis and the split of identity in the conditions of totalitarianism, its devastating consequences for the identificational process of Ukrainianness in general are shown.

Central place is given to the research of the specifics of civilizational identity of independent Ukraine, the role of its components – ethnic, religious, national, civic and European identity, the impact of international relations, democratization of the society, digitalization and globalization of the modern world, Russia’s aggressive politics on identification processes is clarified. The ways of preserving Ukrainian identity in a foreign environment, the role of foreign Ukrainianness in the formation of civilizational identity are highlighted. A number of proposals for further research of the problem, the roles of the state and civil society in activation of the identification process in modern Ukraine and its prospects are expressed.

Made for scientists, lecturers of history, philosophy, cultural studies, sociology, social psychology, political science, ethnology, teachers, graduate students and undergraduate students, all those who are interested in Ukrainian history, methodology of its civilizational, anthropological and sociocultural knowledge.

The edition is dedicated to the bright memory of professors Ivan Kuras, Yuriy Levenets, Mykola Mykhalchenko, Larysa Nagorna, May Panchuk and other Ukrainian ethno-political scientists who passed away.

The text of the monograph (PDF)