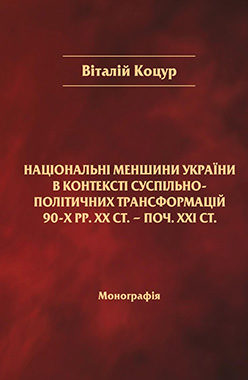 The monograph deals with the multinational socio-political, socio-cultural space of Ukraine in 1990’s of 20 century – beginning of 21 century in the scientific discourse of scientists, polylogue of state bodies and public movements. A comprehensive study of national minorities is conducted as a subject of Ukrainian statebuilding, a determining factor of socio-cultural progress, socio-political transformations and, at the same time, political instability in the context of the foreign policy challenges of 1990’s of 20 century  – beginning of 21 century, which brings Ukrainian society closer to the peculiar point of bifurcation – a new state, promising solutions for conflict resolution.

The monograph is the first special study of the history of national minorities of Ukraine in the context of socio-political transformations of 1990’s of 20 century – beginning of 21 century using a large array of historical and political materials and first introduced into scientific circulation archival documents. The book is intended for scholars, teachers, students and everyone interested in history.