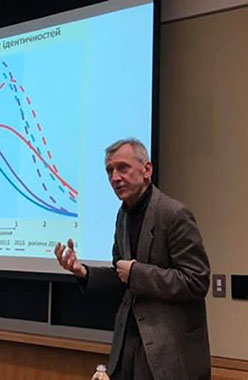 On February 11, 2019, Dr. Mykola Riabchuk, a Senior Fellow of the Institute of Political and Ethnic Studies of the National Academy of Sciences of Ukraine, delivered a public lecture on “Two Ukraines” Reconsidered: What the Euromaidan and Russo-Ukrainian War Have Wrought and What They Have Not” at Harvard University, USA. In his presentation, he contended that the undeclared Russo-Ukrainian war had substantially changed political views and geopolitical orientations of many Ukrainians. Even more crucially, it caused some shift in identities and value systems. The ethnically Russian and Russophone part of Ukrainian population was in particular challenged by the events and targeted by the Russian propaganda. Most of them, besides the Russia-occupied Crimea and Donbas, stood up for the Ukrainian cause and surprised many foreign observers, let alone Kremlin, with their newly discovered Ukrainian patriotism and civic loyalty. At the same time, the Ukrainian society remained strikingly ambivalent about many key issues, exposing a substantial residual attachment to various aspects of the imagined “East Slavonic” community that are barely compatible with a genuinely Ukrainian loyalty and identity. In the lecture, Mykola Riabchuk examined the available sociological data and argued that the new, future-oriented type of Ukrainian identity was evolving in a painstaking struggle with old habits, views and system of values. It may well supersede all the ethnic, linguistic and other divides in Ukrainian society if the new social trust that emerged between various groups during the war against the common enemy is properly institutionalized and effectively supported by both the functional state and nascent civil society. The full video record of the presentation is accessible at https://www.youtube.com/watch?v=9dGIfN919Wo