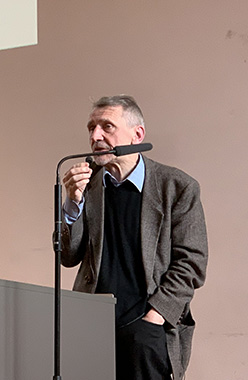 On December 4, 2018, Dr. Mykola Riabchuk, a Senior Fellow of the Institute of Political and Ethnic Studies of the National Academy of Sciences of Ukraine, delivered a public lecture on “How civil is the Ukrainian civil society today?” at the University of Regensburg. In his presentation, the scholar defined Ukraine as a country with a relatively strong civil society that proved its strength during both the “Orange” (2004) and “Euromaidan” (2013-14) revolutions and the ensuing Russo-Ukrainian war that invoked unprecedented civic mobilization and volunteer movement in support of the beleaguered state and its dilapidated armed forces. Since then, Ukrainian civil society has also played an important role, alongside with some international sponsors, in “sandwiching” the evasive Ukrainian government and pushing it toward more radical reforms and crackdown on corruption. To provide a more nuanced picture, the speaker addressed three contiguous problems. First, he discussed the internal vulnerability of civil society groups and some leaders to corruption and peccability that is skilfully used by the oligarchy to undermine credibility of the whole movement. Secondly, he mentioned their overwhelming dependence on international grants and sponsors and rather weak grass-root activity, especially beyond the large cities. And thirdly, he examined a rather ambiguous, often evasive stance of many civil society leaders vis-à-vis “uncivil society” that has also been boosted by the revolutionary upheaval. Today, however, it represents quite a threat for the fledgling Ukrainian democracy – not so much by its quantity and electoral strength but by its radical ideology, hate speech, and proclivity to violence. The speaker emphasized the need for more balanced assessment of all these problems inasmuch as they are often silenced or downplayed, on one side, and overblown and misinterpreted, on the other.