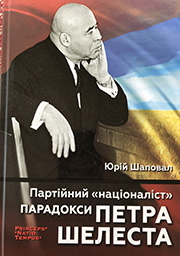 Petro Shelest has a special place in the political history of Ukraine of the XX century. Having gone through a difficult life path, in 1963 he became the first secretary of the Central Committee of the Communist Party of Ukraine. He supported Khrushchev and his political line, but he was among those who brought L. Brezhnev to power.

What is the secret of such Petro Shelest’s duality? Who and how created for him the image of an "excessive" Ukrainian patriot and even a "nationalist"? How did his fate develop after he was sent for a "promotion" to Moscow and then subjected to political and ideological ostracism?

The author of this book, written using unique and previously unavailable archival sources, seeks to find answers to these and other questions.

You can view the contents (in original language) here