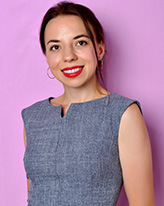 She was born on October 2, 1991 in the village of Kotyuzhany, Murovanі Kurylivtsi district, Vinnytsia region.

In 2013, she graduated from Yuriy Fedkovych Chernivtsi National University with a degree in “Country Studies” and received a qualification of a political scientist and translator. During 2014-2015, she was a participant in the Polish government’s scholarship program for young scientists (Program Stypendialny Rządu RP dla Młodych Naukowców).

In 2017, she passed Ph.D. defense on “Specifics of Electoral Uncertainty of the Citizens of the French Republic and the Republic of Poland” at the specialty 23.00.02 – Political Institutions and Processes. Since June 2017, has been working at Kuras Institute of Political and Ethnic Studies, National Academy of Sciences of Ukraine as a research scientist at the Department of Socio-Political History. As part of her research, she studied the regional political regime in the Kharkiv region and the regional political elite of the Lviv region.

Since May 2020 – a participant in the scholarship program of the National Academy of Sciences of Ukraine for young scientists.