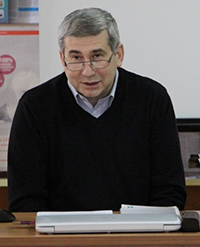 Leading Research Scientist of the the Department of Ethnopolitical Studies, Head of the Center for Jewish History and Culture, Candidate of Historical Sciences.

He was born in Kyiv on April 28, 1968. In 1993 he graduated from the historical faculty of Kyiv Pedagogical Institute (now National Pedagogical Dragomanov University).

In 1996 he defended his dissertation on “Nazi Genocide against the Jews of Ukraine (1941-1944)”, the specialty 07.00.05 – ethnology and received the degree of Candidate of Historical Sciences.

He has been working at Kuras Institute of Political and Ethnic Studies of the National Academy of Sciences of Ukraine since July 1993. Since July 2015, he has held the position of the Leading Research Scientist in the Department of Theory and History of Political Science.

Chairman of the trade union organization of Kuras Institute of Political and Ethnic Studies of the National Academy of Sciences of Ukraine, member of the Scientific Board of the Institute.

Founder and member of the editorial board of the scholarly journal “Holocaust and Modernity. Studies in Ukraine and the World” and the information and pedagogical bulletin “Lessons of the Holocaust”.

He is a participant in many international scholar events on Jewish studies in Ukraine, Israel, Great Britain, the USA, Canada, Poland, Belarus, Germany, Austria, France, Russia, and Moldova. In 2000-2001 he worked in Dnipropetrovsk (now Dnipro), where he founded and headed the first in Ukraine scientific and educational center for the study of the History of the Holocaust – “Tkuma”.

Founder and head of the scholarly and educational nongovernment, public organization: Ukrainian Center for Holocaust Studies, established in March 2002 with the support of Kuras Institute of Political and Ethnic Studies of the National Academy of Sciences of Ukraine.

Author of the first in Ukraine dissertation research of the Holocaust History and more than 160 scholar and educational works on Jewish history and culture, Holocaust history, history and current cultural and political situation of the Jewish community of Ukraine.

Head of the author’s team of four collective monographs (published during 2008-2020) on the issues of Jewish Studies, the role of Ukrainian Jews in socio-political development. Scholar editor and compiler of more than 40 research and research -methodical publications.