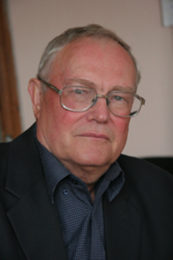 Until March, 2021 – Head of the Department of Theory and History of Political Science, Doctor of Philosophy, Professor, Corresponding Member of the National Academy of Sciences of Ukraine.

He was born in the Kosychi village, Surazh district, Bryansk region.

In 1960 he graduated from the Kharkiv Technical School of Industrial Transport (railway department). In 1969 – the Faculty of Philosophy of the Shevchenko Kyiv State University. In 1973 he defended his PhD and in 1987 his doctoral dissertation. He was awarded the academic title of professor in 1988. Corresponding Member of the National Academy of Sciences of Ukraine (2003).

Author (co-author) of more than 350 scientific works, including 15 monographs (6 individual and 8 co-authored), textbook “Modern Social Philosophy” (in 2 volumes, ed. 1994, 1996, co-authored with VP Andrushchenko). The scientific team, which he led in 2001-2002, published a 6-volume “Social Work” for the Free Economic Zone of Ukraine. He is one of the authors and implementers of the idea of ​​publishing a 6-volume “Philosophy of Politics” (2002-2004).

Prepared 38 candidates and 34 doctors of sciences.

He was one of the founders of the philosophical direction of research on the interaction of state and civil society institutions, in particular in solving an important task of political philosophy – reflective reconstruction of evolutionary and revolutionary drivers of the political process embodied in reality and preconditions, potentials not embodied in reality but existing in it. as constructive and historical natural reserves used by society in transition periods. He developed the theory of ideologies, the concept of transformation of established societies and societies of transitional nature in the light of the dialogue of civilizations and cultures.

In the study of the problems of Ukrainian society and the state he developed a socio-cultural methodology for analyzing the formation and development of societies that go through several stages of pre-state and state formation, where economic, political, social and spiritual aspects of society in different periods play different roles. This is due to the specifics of the development of material and spiritual culture of each society. He developed the concept of transformation and modernization of Ukraine in the last quarter of the twentieth century and the beginning of the XXI century.

Research interests: philosophy of history, philosophy of politics, philosophy of education, spiritual and political life of society, social institutions and social relations, worldview problems of Ukrainian society. The scientist researches methodological and ideological problems of social cognition; objective and subjective factors of the historical process; driving forces of political and spiritual life of society; philosophical and ideological processes of education, in particular, higher; genesis of social relations and social institutions in different types of civilizations, regions, countries; the process of development of higher education as a training system.