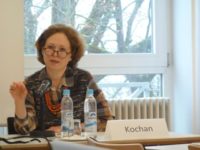 She graduated from the Faculty of History of Taras Shevchenko National University of Kyiv (1980). The degree of Candidate of Philosophical Sciences in Religious Studies was awarded in 1991. In 2013 she was awarded with the academic title of senior research scientist.

Since 2006 she has been working at the Department of National Minorities of Kuras Institute for Political and Ethnic Studies of the National Academy of Sciences of Ukraine.

In the 1990s and 2000s, she worked as a visiting research scientist in scientific institutions in Italy, the Netherlands, and Germany.

Laureate of the M. Hrushevsky’s prize pf the  National Academy of Sciences of Ukraine for a series of works “Ethnopolitical situation in the Ukrainian Donbass: genesis, features, directions of settlement” (2018, co-authored with O. Kalakura and V. Kotygorenko).

Author of over 200 scientific papers. Her works have been published in scientific journals in Great Britain, the Netherlands, the United States, Germany, Italy, the Vatican, and the Russian Federation.

Research interests: history, theory and practice of interaction of religious, ethnic, national and political factors in socio-political processes in Ukraine in the XIX-XXI centuries. both at the national and regional level (Transcarpathia, Galicia, Donbass).