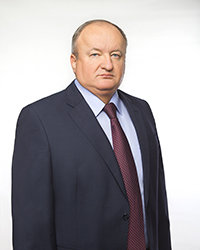 He graduated from the Faculty of History (1983) and postgraduate studies at Taras Shevchenko National University of Kyiv.

In 1990, under the scientific supervision of Doctor of Historical Sciences, Professor Serishchev Y, he presented the thesis: “International revolutionary relations of student youth in Ukraine (late XIX century – 1914).

After defending his thesis, he worked as Senior Lecturer, Head of the Department of History of Ukraine, Dean of the Faculty of Foreign Languages ​​of Volodymyr Vynnychenko State Pedagogical University.

In 1998–2000 he studied for a doctorate at the Institute of Political and Ethnic Studies of the National Academy of Sciences of Ukraine. During 2000–2003, he worked as Leading Research Scientist at this Institute.

In 2001 he presented his thesis for a Doctor’s degree: “National minorities of Ukraine in the XX century. Historiography ” (Research Adviser – Academician of the NAS of Ukraine I. Kuras).

Member of the specialized scientific council for the defense of dissertations for the degree of Doctor (Candidate) of Historical Sciences at the Taras Shevchenko National University of Kyiv.

Editor-in-Chief of the scientific journal “Political Studies”, Deputy Chairman of the Editorial Board of the “Great Ukrainian Encyclopedia”, he is a member of the editorial boards of a number of domestic and foreign scientific publications.

Author of numerous scientific publications, including more than two dozen individual and collective monographs, encyclopedias, textbooks and manuals. Editor and compiler of collections of scientific papers, legislative and regulatory acts.

Has prepared 12 doctors and candidates of sciences.