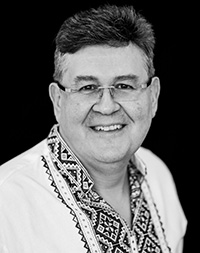 Born in 1969.  He graduated from the history department of the Taras Shevchenko National University of Kyiv in 1992.  In 1995 he defended his dissertation on “Ukrainian Polonia in 1917 – 1939 of the twentieth century” in the specialty 07.00.05 – ethnology, in 2008 – his doctoral dissertation “Poles in ethnopolitical processes in the lands of Ukraine in the twentieth century” in the specialty 23.00.05 – ethnopolitics and ethnostate studies.  In 2005, Kalakuri O.Ya. was awarded with the academic title of senior researcher, in 2015 – professor.

Since August 1992 he has been working at the Institute of Political and Ethno-National Studies of the National Academy of Sciences of Ukraine.  In 1996 he studied at the International Postgraduate School of Humanities “East-Central Europe: New Research and Teaching Methodologies.  Lviv-Warsaw”.  In 1997 he was a student of the VI Eastern Summer School of the University of Warsaw (Warsaw-Vilnius-Minsk-Lviv-Warsaw). In 2003 he won the competition for young scientists of the National Academy of Sciences of Ukraine with the research project “Poles in Ukraine: interethnic dialogue of the twentieth century.”

Member of the editorial board of the Scientific Notes of the Institute (until 2021), scientific journal “Political Studies”.  Member of the interdepartmental commission at the Ministry of Foreign Affairs of Ukraine on support of foreign Ukrainians in 2009-2011, in 2017-2019 – Deputy Chairman of the Expert Council of the Ministry of Culture of Ukraine on Ethnopolitics.

In 2018, for the series of works “Ethnopolitical situation in the Ukrainian Donbass: genesis, features, directions of settlement, Oleg Kalakura together with Viktor Kotygorenko and Natalia Kochan was awarded the Hrushevsky Prize of the NAS of Ukraine (for outstanding scientific works in the field of historical Ukrainian studies and sociology).

He has participated in more than 100 domestic and international scientific and practical conferences on international relations in Ukraine, outstanding events in its history, modern issues of ethnopolitics and ethnopractice.

The field of scientific interests of O.Ya. Kalakura is directly related to the priority topics of the research conducted by the Institute.  His scientific research covers interdisciplinary problems of national and world history, ethnopolitics and ethnostate studies, ethnology, demography, law, Ukrainian studies.