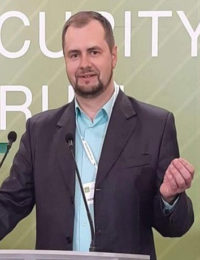 He was born on August 2, 1979 in the Biloshapky Village of the Pryluky District of the Chernihiv Region.

In 2001, he graduated from the Faculty of History and Law of the Nizhyn Mykola Gogol State University.

In 2008, he defended his dissertation for the degree of Candidate of Historical Sciences on “Archival funds of the National Academy of Sciences of Ukraine as a source for studying the development of Ukrainian academic historical science (1944-1956)”. In 2014, he was awarded the academic title of Associate Professor at the Department of International Information of the Institute of International Relations of the Taras Shevchenko National University of Kyiv.

In 2019, he defended his dissertation for the degree of Doctor of Political Sciences on “Geostrategy of the Russian Federation: theoretical foundations and practical implementation”.

In 2001–2003, he worked as a history and law teacher at the Velikodimersky Educational Complex in the Brovary District of the Kyiv Region. In 2003–2008, he was a junior researcher at the V.I Vernadsky National Library of Ukraine of the National Academy of Sciences of Ukraine.

In 2008–2016, he worked as an associate professor of the Department of International Information at the National Aviation University. In 2016–2019, he worked as a senior researcher at the Research Section of the Taras Shevchenko National University of Kyiv. He participated in the development of a number of planned research topics for the Ministry of Education and Science of Ukraine, as well as being an official opponent in the defense of several dissertations for the degree of Candidate of Political Sciences.

O.Y. Kondratenko has been working at Kuras Institute of Political and Ethnic Studies of the National Academy of Sciences of Ukraine since 2019 as a Leading Reserch Scientist at the Department of Theoretical and Applied Problems of Political Science.

O.Y. Kondratenko is the author of 150 research papers, including the ones published in Poland and Russia.