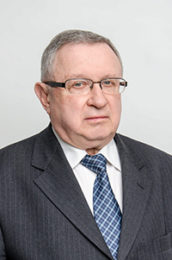 Deputy Director of Research, Doctor of Historical Sciences, Professor, Corresponding Member of the National Academy of Sciences of Ukraine.

He has been working as a research scientist since 1979. During 1979-1996 he worked at the Institute of History of Ukraine of the National Academy of Sciences of Ukraine as a junior (1979-1986), senior (1986-1990), leading (1990-1994) research scientist of the Department of Historiography and Historical Relations of Ukraine with foreign countries. During 1994–1996 he was the head of the department of reference publications of this Institute. In 1996-1997 he was an expert at the Center for Political Analysis of the newspaper “The Day”.

He worked at the Institute of Political and Ethno-National Studies of the National Academy of Sciences of Ukraine since 1997 as a Chief Research Scientist, Head of the Department of Ethno-Political Science and since 2006 he has been working at the Institute as the Deputy Director for Research.

He is well-known specialist in the field of political and historical science. As one of the founders of a new discipline in the structure of domestic political science – ethnopolitics, he has participated directly in the formation of its conceptual corpus and terminological apparatus, the definition of thematic guidelines, outlining methodological principles.

He took an active part in the work of the Constitutional Assembly of Ukraine, in the commissions on ethnopolitics under the President of Ukraine and the State Committee for Nationalities and Religions, in the National Commission on Public Morality, he was a member of the Organizing Committee for Perspective Development of the National Historical and Memorial Reserve».

One of the initiators and authors of fundamental scientific projects – a six-volume “Political History of Ukraine” (2002-2003), the publication of “Political Encyclopedia” (2011), “Political Science in Ukraine” (2016). He has participated in a number of international research projects, including the international study “Political and Economic Transformations in Russia and Ukraine”, the Ukrainian-Canadian research project “Conceptual Principles of Ethno-National Policy: Between Theory and Practice”.

He was a participant in the development of one of the first versions of the Concept of State Ethno-National Policy of Ukraine. He is one of the authors and editors of a number of national reports of the NAS of Ukraine, including “National Sovereignty of Ukraine in the context of globalization” (2011), “Civilizational choice of Ukraine: a paradigm of understanding and strategy” (2016), “Ukraine: the path to social consolidation” (2017). Head of a number of purpose-oriented research projects of the National Academy of Sciences of Ukraine.

He taught author’s courses on the typology of totalitarianism and European integration at the Diplomatic Academy of Ukraine under the Ministry of Foreign Affairs of Ukraine and at the National University “Kyiv-Mohyla Academy”.

Supervisor and consultant of about 20 defended doctoral and candidate dissertations.

Author of more than 260 scientific publications, including 5 monographs. Scientific research is aimed at conceptual understanding of issues related to Ukrainian nation-building, the development of the Ukrainian national idea, the defining stages of the political history of Ukraine and current domestic political problems.