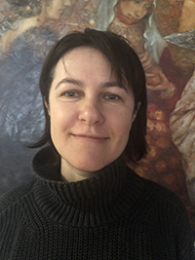 Junior Research Scientist at the Department of Political Institutions and Processes, Candidate of Political Sciences.

She was born on April 5, 1977. She graduated from the Zaporizhia State University and went on to finish the graduate school of the Institute of Political and Ethno-National Studies of the National Academy of Sciences of Ukraine in 2004.

In 2005, she defended her dissertation on “Personality as a subject of politics: the motivational aspect of the exercise of political power” and received the degree of Candidate of Political Sciences.

S.H. Brekharia has been working at Kuras Institute of Political and Ethnic Studies of the National Academy of Sciences of Ukraine since 2004 as a Junior Researcher at the Department of Theoretical and Applied Problems of Political Science.

Reserch interests: the subjective factor in politics, the influence of national mentality on the course of political processes, application of psycholinguistics in political science, models of interaction between government, business and society.