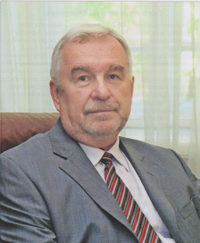 Chief Research Scientist of the Department of Theory and History of Political Science, Doctor of Historical Sciences, Professor, Corresponding Member of NASU, Honored Worker of Science and Technology of Ukraine, NAS of Ukraine M. Kostomarov prize and the International V. Vinnichenko prize laureate.

He was born on April 13, 1946 in Selidove, Donetsk region, to a family of employees. He graduated from Druzhkivska High School with a Gold Medal and the Faculty of History of Taras Shevchenko National University of Kyiv with honors.

After entering graduate school in 1970, he was immediately invited to teach at the Department of History of the CPSU, Faculty of Humanities, National University of Kyiv. Until 1976, he worked as an assistant, senior lecturer, acting associate professor. In 1973 he defended his dissertation on “The Bolshevik Press of Ukraine in the struggle for implementation of Lenin’s policy of proletarian internationalism during the preparation and conduct of the Great October Socialist Revolution (March-December 1917).”

From 1976 to 1984 he was a senior researcher in the party history sector of the Institute of Party History under the Central Committee of the Communist Party of Ukraine, a branch of the Institute of Marxism-Leninism under the Central Committee of the CPSU. In 1981 he defended his dissertation for the degree of Doctor of Historical Sciences on “The Bolshevik Press of Ukraine in the struggle for implementation of Lenin’s strategy and tactics of the socialist revolution (March 1917 – March 1918).”

In 1984-1988 he headed the Department of Historical Experience of the CPSU of the Kyiv Higher Party School, and in 1986 he received the title of professor.

In 2006 he was elected a corresponding member of the National Academy of Sciences of Ukraine, majoring in History of Ukraine.

From 2010 to 2014 he worked as the head director of the Ukrainian Institute of National Memory under the Cabinet of Ministers of Ukraine. Civil servant of the third rank. In 2011 he was awarded the honorary title of “Honored Worker of Science and Technology”, in 2012 he was awarded the Diploma of the Verkhovna Rada of Ukraine.

Since 2014 – Chief Research Scientist of the Kuras Institute of Political and Ethnic Studies of the National Academy of Sciences of Ukraine. Member of the editorial boards of a number of scientific journals, collections, documentaries, generalizing collective works. Member of the Academic Councils for the defense of doctoral and candidate dissertations.

Author of more than 850 publications. Of these, 35 are individual monographs, as well as dozens of books co-authored or with the participation of collective research.

Research interests: history of socio-political, revolutionary national liberation movements of the first decades of the XXth century. He studies the genealogy of the Ukrainian idea, socio-political thought, the experience of national statehood, catholicism, diplomatic and military history. Develops problems of historiography and methodology of historical research, modern Ukrainian studies, political science, theory and policy of historical and national memory.