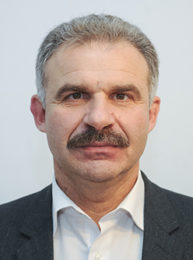 Chief Research Scientist at the Department of Political Culture and Ideology, Doctor of Philosophical Sciences, Professor.

V.Yelensky earned his MA (History) Diploma from Kyiv State University (1982); Candidate of Science Diploma for his thesis ‘Protestantism in the Process of Social Adaptation to the Conditions of Soviet Society’ (1989), and Doctor of Science Diploma for his thesis ‘Religious and Societal changes in the Process of Post-Communist Transformation: Ukraine within the Central and Eastern European Context’ (2003) from Skovoroda Institute of Philosophy of the National Academy of Sciences of Ukraine.

He worked as a Research Scientist at Institute of Sociology of the NAS, and Senior, Leading Research Scientist at Institute of Philosophy, edited Ukrainian Journal for Religious Studies Lyudina i Svit, headed Kyiv Bureau of Radio Liberty, taught at Drahomanov National Pedagogical University, and Diplomatic Academy of Ukraine at the Ministry of Foreign Affairs of Ukraine, headed the Chair at Ukrainian Catholic University. Within 2014 Viktor Yelenskyi served as an Adviser to the Prime Minister of Ukraine. In 2014 Prof. Yelenskyi was elected to the Verkhovna Rada (Parliament) of Ukraine and during 2014-19 headed the Parliamentarian Sub-Committee for Religion and State Affairs and Religious Freedom. He drafted Governmental Decree on Military Chaplaincy in Ukraine and several Bills on Cultural Heritage, Sea Memorial, Church and State issues, and Creative Industries which successfully went through Parliamentarian voting. He also drafted Memorandum Religion and Changes in Central and Eastern Europe on the basis of which Parliamentary Assembly of the Council of Europe Recommendation No 1556 has adopted (2002). Member of the Parliamentary Assembly of the Council of Europe

Viktor Yelenskyi was awarded with Honorary Diploma of the Verkhovna Rada of Ukraine and with the Order of Merit of III degree (2018).

Viktor Yelenskyi has been worked at Kuras Institute of Political and Ethnic Studies of NAS since 2020.

He authored great number of books, articles and essays on religious freedom, religion and politics, global religious trends and transformations published in Ukraine as well as in the USA, UK, Germany, Belgium and in other countries.

His interests include ethnosociology and sociology of religion, religion and politics, Church and State, global ethnic and religious trends.