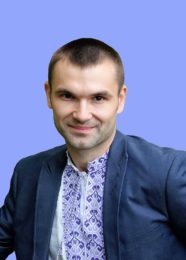 In 2006, he graduated SHEI «Pereiaslav-Khmelnytskyi Hryhorii Skovoroda State Pedagogical University», received a specialty in History and Law. During 2003-2007, he studied at the Institute of International Relations of Taras Shevchenko National University of Kyiv, specializing in international information.

In 2006, he trained in Bremen in the Deutsche Angestellten-Akademie, as well as in CASA Internationale Sprachschule Bremen.

From 2007 to 2010, he studied at the post-graduate course at Pereiaslav-Khmelnytskyi Hryhorii Skovoroda State Pedagogical University.

On June 7, 2011 he defended his Ph.D. thesis on “Ethnopolitical Conflict in Transnistria in the Context of Ukrainian-Moldovan Interstate Relations” at Kuras Institute of Political and Ethnic Studies of the National Academy of Sciences of Ukraine and obtained a Ph.D. in Political Science in specialty 23.00.05 – Ethnopolitics and Ethno-state studies.

On September 11, 2020 he defended his Doctorate thesis “National minorities of Ukraine in the context of social and political transformations of the 90s years of the XXth century – the beginning of the XXIst century” at the Institute of Ukrainian History of the National Academy of Science of Ukraine and obtained a Doctorate Degree in Historical Science in speciality 07.00.01 – History of Ukraine.

At Kuras Institute of Political and Ethnic studies of the National Academy of Sciences of Ukraine he has been working since 2011 as a research scientist, senior research scientist at the Department of National Minorities. Since 2010 he has been working as a teacher, senior lecturer, associate professor and professor of political science department at the SHEI «Pereiaslav-Khmelnytskyi Hryhorii Skovoroda State Pedagogical University» (part-time job), in the city of Pereiaslav-Khmelnytskyi.

Since 2010, he has been a member of the European Association for Security.

As the head of the working group in the Ukrainian delegation, he participated in the international EU Project 2017 “Strengthen Cross-Cultural Connections, Embrace the Differences.” The project was implemented by the Istanbul Foundation for Science and Culture within the framework of the Erasmus Educational Exchanges + from 5.05 to 4.11.2017.

In 2017 – executant of the Danish-Ukrainian project “Human Rights, Democracy, Diversity and Internationalization of Ukrainian Society”. Member of the EU program Erasmus + KA2. No. 586098-EPP-1-2017-1-UA-EPPKA2-CBHE-JP ” Modernization of Pedagogical Higher Education by Innovative Teaching Instruments – MoPED” from October 15, 2017 to October 14, 2020.

Member of the National Union of Regional History of Ukraine.

Received the Honourable Sigh from the European Security Association (European Union. Krakow, 2012). Acknowledgment for personal contribution to the improvement of legislation in the field of national security and defense, information and methodological support to the activities of the Secretariat of National Security and Defense Committee of the Verkhovna Rada of Ukraine, for the feeling of high patriotism and civic stance (2016). Awarded the Order of St. Archangel Michael for merits on the revival of spirituality in Ukraine and the establishment of the Local Ukrainian Orthodox Church (2017). He was awarded diplomas of Pereiaslav-Khmelnytsky City Council (2017) and Kyiv Regional Council (2020).