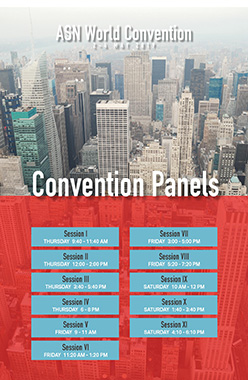 The ASN 24th World Convention was held on May 2-4 at Columbia University in New York. More than hundred discussion panels were organized and nearly half a thousand papers presented. A few dozens of them featured prominently Ukraine-related topics, covered by both Ukrainian and international scholars. The detailed program can be accessed at the Convention web-site: https://www.asnconvention.com/

On the last day of conference, Dr. Mykola Riabchuk, a Senior Research Fellow of the Institute of Political and Ethnic Studies of the National Academy of Sciences of Ukraine, presented a paper entitled ‘Hybrid Censorship’ During the ‘Hybrid War’: Freedom of Speech and Expression in the Post-Euromaidan Ukraine. In his talk, he addressed an ambiguous situation in the realm of freedom speech and expression in contemporary Ukraine that resulted from a peculiar character of the undeclared Russo-Ukrainian war and the lack of adequate means to frame it analytically and tackle practically.

On the one hand, he argued, the Ukrainian authorities have been heavily criticized within the past few years by international watchdogs and independent observers for some legal steps and practical policies that allegedly curtailed freedom of speech and access to information in the country. On the other hand, the government and its supporters retort that the policies are justified by the actual situation of war waged by the neighboring Russia against Ukraine and have nothing to do with a censorship in a conventional sense but, rather, represents a defensive measure against the enemy’s propaganda, subversion, and provocative disinformation. The debate, as the speaker contended, represents a particular case of a broader controversy between the demand for unrestrained freedom of speech indispensable for modern democracy and the need of those very democracies to protect themselves from the rogue individuals, groups, and regimes that have increasingly learned how to weaponize media and (dis)information for their malevolent goals.

While in the U.S., Mykola Riabchuk delivered also a lecture on the same topic at the University of California at Los Angeles on May 2.