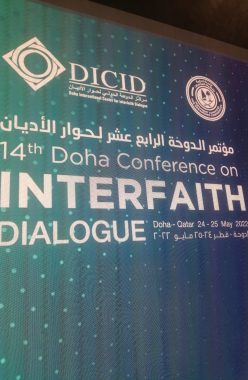 On May 24-25, Qatar hosted the 14th Conference on Interreligious Dialogue, which brought together religious leaders – representatives of various currents of Christianity, Islam and Judaism, scholars, statesmen from 49 countries.

At the Conference, the theme of which this year was “Religions and Hate Speech. Sacred texts and practices”, the report was made by the Chief Researcher of our Institute Viktor Yelenskyi. On the example of the doctrinal evolution of the socio-theological thought of the Moscow Patriarchate, he showed how the theory and practice of dehumanizing the “other” grew out of the language of enmity. This dehumanization goes through stages of desecration of the sanctities of the “other”, then – the denial of his right to his own identity and existence as “another” to the denial of the right to physical existence as such.

The speaker stressed that the radical break between the Moscow Patriarchate and its own social concept coincided with the internalization and sacralization of the doctrine of the “Russian world”, now condemned by leading Orthodox theologians and scholars as ethnophiletic and heretical. Viktor Yelenskyi pointed out the factors that turn hate speech into the speech and practices of hatred and, ultimately, the legitimization of war to destroy the object of hatred. He called on the religious and political leaders participants of the Conference to take concrete steps to prevent any involvement of instigators of war in membership in interfaith world and regional organizations, to inevitably punish them and to establish mechanisms to respond effectively to religious justification of aggressive wars and violence.