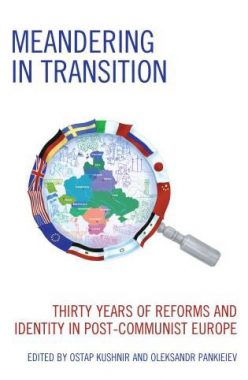 On November 29-30, the Canadian Institute of Ukrainian Studies (CIUS) organized an international conference “Ukraine in the Context of Thirty Years of Identity-Building in Post-Communist Europe” as a follow-up to the recently published volume “Meandering in Transition. Thirty Years of Reforms and Identity in Post-Communist Europe” (ed. by Ostap Kushnir and Oleksandr Pankieiev) that contains 17 essays by a dozen international authors. At the opening of the conference, Dr. Mykola Riabchuk, a Senior Research Fellow of the Ethnopolitics department of the Institute of Political and Ethnic Studies, presented a paper “Shifting the wall further east: What remains of ‘Eastern Europe’ thirty years later?” where he examined divergent trajectories of postcommunist states and attempted to outline the key factors that determined the process. He argued that not only structural factors, primarily the level of westernization in the pre-communist past, played a substantial role nowadays, but also specific decisions and policies of domestic and, sometimes, international actors contributed to the success of failure of postcommunist transformations.

The streamline of the conference can be viewed at the CIUS web-page: