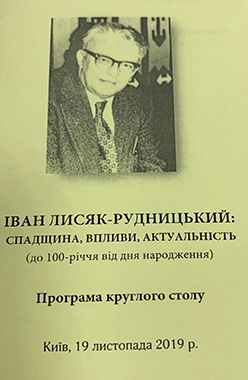 On November 19, a “round table” on the 100th anniversary of the outstanding Ukrainian historian Ivan Lysiak-Rudnytskyi was held at the Institute of History of the NAS of Ukraine. The event was distinguished by its interdisciplinary character: historians, philosophers, political scientists and physicians took part in it. Our Institute was distinguished by the respectable representation in the person of Director Oleg Rafalskiy, Deputy Director  Oleksandr Mayboroda and the Chief Research Scientist Yuriy Shapoval.