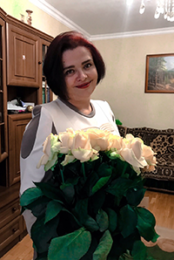 Chief Researcher of the Department of Theory and History of Political Science, Doctor of Historical Sciences, Professor.

In 1995 she defended her Candidate’s dissertation on the topic: «Formation of the Ukrainian state during the Central Rada (March 1917 – April 1918)», and in 2005 – her doctoral dissertation on the topic: «Ukrainian Party of Socialists-Revolutionaries: organization, ideology, politics».  In 2003 dhe was awarded the Academic title of Associate Professor of Political Science, and in 2014 – Professor of 23.00.01 «Theory and History of Political Science».

Author of about 300 scientific papers on political science and problems of Ukrainian history.